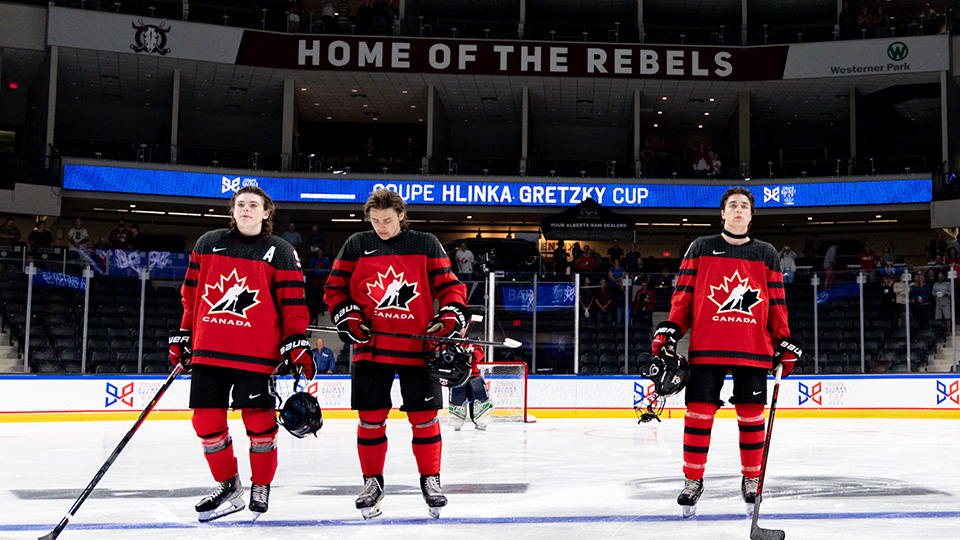 No team has placed more players on Canada’s National Men’s Summer Under-18 Team than the Red Deer Rebels, and the famed WHL franchise is once again in the spotlight as Red Deer hosts the Cup Hlinka Gretzky

With a history that spans more than three decades, the Hlinka Gretzky Cup is an annual summer hockey tradition, played in five countries since Yokohama and Sapporo, Japan, which hosted the Phoenix Cup in 1991.

So it’s only fitting, as the tournament returns to Canadian ice for the third time, that Red Deer is the host.

The city’s ties to the tournament run deep – the Red Deer Rebels of the Western Hockey League (WHL) have sent more players to Canada’s National Men’s Summer Under-18 Team than any other Canadian Junior Club; Team Canada forward Kalan Lind is the 18th Rebel to wear the Maple Leaf.

There is pride in representing the team… and the city.

“I got drafted by Red Deer when I was 14, and being from BC, I didn’t know exactly where it was; now, 23 years later, I still live here today,” says former Rebels captain Colin Fraser. “Red Deer is a small town that loves hockey and always has.

Fraser was part of Team Canada at the 2002 Eight Nations Cup in the Czech Republic and Slovakia, scoring two goals and adding an assist in five games to help Canada win gold. The list that year included names like Phaneuf, Seabrook, Richards and Perry.

He captained the Rebels in the last of his four seasons in central Alberta in 2004-05, the same year he won gold with Canada at the 2005 IIHF World Junior Championship, without arguably the best Canadian team to date at the World Juniors.

“At the time, you almost take it for granted; you look back now and realize as an old man how lucky you were to play with and against all those superstars, stars, Stanley Cup champions and Olympic gold medalists,” Fraser says, who himself won the Stanley Cup with Chicago (2010) and Los Angeles (2012).

Now working as a Western Canada scout for the Red Deer-based Blackhawks, Fraser sees the tournament as the official start of the scouting season and build-up to the 2023 NHL Draft.

“From that side, the importance of seeing the best draft picks for next season here, all under one roof and playing against each other, it really helps things,” he said. “It allows you to see where they are at the start of the season.”

Another former Rebels captain has a unique perspective on the connection between hockey, Red Deer and Team Canada.

Brandon Sutter is a Red Deer native who played 205 games in four seasons with the Rebels, a team owned by his father, Brent (who is also president and general manager of the Rebels). Sutter was part of Team Canada at the 2006 U18 Junior World Cup, recording two assists in four games as Canada won gold.

“It’s a community that loves hockey,” says the Vancouver Canucks forward, who also played at two IIHF U18 World Championships and the 2008 IIHF World Junior Championship. “On weekends, people love to hang out at the Centrium – that’s kind of what you do. You grow up playing minor hockey here and when you get older you realize how appealing junior hockey is, it really brings a lot of people together.

Sutter remembers the 2006 summer U18 tournament as one of his first major international experiences. It highlights new experiences and timing the event in late summer to make it a truly unique event.

“When I played it was in Piestany, and it was like a different world – it was a really cool experience,” he says. “I remember going to
[selection] camping in the summer; it was kind of my first time going to a camp with all these guys from across Canada, a lot of guys from the East that you might only know by name.

“All those [U18 world championship] the experiences were great, but that
[summer U18] tournament was one where every child was available. It was always the crème de la crème of your age across Canada, so it was pretty cool to be on this team where you really deserve your place.

Sutter is proud of the work done by his father and brother (Merrick, senior vice-president of the Rebels). They have been an integral part of the city and the franchise hosting some of the biggest events in Canadian junior hockey.

“Brent and Merrick do such a professional job putting on events like the Hlinka Gretzky Cup, World Junior Championships [and] the Memorial Cup in this region; they really put Red Deer on the hockey map,” Fraser added. “I consider myself really lucky to have played for Brent – I learned a lot about values, work ethic and just the intangibles of how to be a professional. He does that as a coach and the organization does all of these things to try to make you a better pro.

“If the Rebels do something, it’s always great – no shortcuts.”